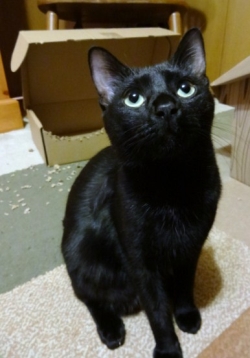 Motor joined one of our technician’s homes in the spring.  He came in with a very badly fractured leg as a young kitten and was surrendered to the clinic when his family couldn’t afford to look after him.  Angie felt sorry for the poor little kitten in a cast who was going to be in the clinic for 6 wee

ks before we could start finding him a home, so she took him home as a foster.  He’s just never left.  He’s now a small almost a year old healthy little boy.  He ended out with an elbow that he can’t bend on a leg that’s slightly shorter, but he doesn’t let that stop him. He races and leaps and plays sometimes driving the other cat’s nuts because he’s so rambunctious.  He got his name because he purr’s just like a motor sound, he’s never far from people to demand more than his share of attention and snuggles. 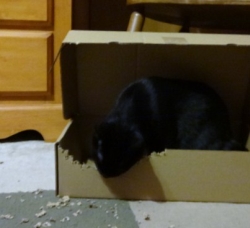 His favorite things to do are to play with crinkle balls, steal lighters, make confetti out of any kind of paper product (notice the box and his handy work all over the floor) and to play chase with his best buddies Chanel the dog and Widget the princess.   Motor is a clever boy who even works well with others …..he knocks things off the counters so that Chanel can pry them open for them to hopefully share the hidden treats inside.  Of course he makes sure that when they get caught Chanel takes all the blame while he looks cute.