Kanin – The story of the sneaky foster kitten. 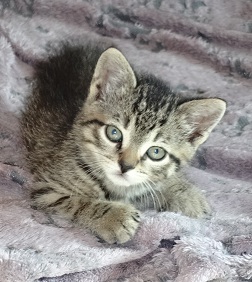 Kanin’s story begins at Animal Services.   Rebecca and Angie were there to pick up an adult cat for our adoption program.  When we walked in we had told Tiffany not to show us any kittens because my foster rooms were both full.  However while in a room picking out Panda we could hear this plaintive kitten cry that turned out to be two rooms away.  Rebecca warned me not to go look but I just had to and I found two small brown tabby brothers sitting in a cage.  One was crying and trying to get out.   Surprise surprise I asked to borrow a carrier and we took the two little boys with us as well.  They became Kanin (the crier) and Kaelin. 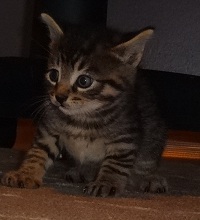 After coming home with me both little guys were absolute dolls.  Kanin was a real people kitty and Kaelin just absolutely adored one of my other cats.  They didn’t have any medical problems they just needed some bottle feeding and time to grow up.

These guys were entered into the Forever Homes Cat Rescue program with The Cat Clinic and I sponsoring their medical expenses.  We had talked about keeping Kanin but decided he would get more attention in another home.  We felt he deserved a family of his own instead of one he had to share with other  fosters.  When they became old enough the brothers  came into the clinic for a final health exam and then headed off to the Petsmart in Burlington, where they were met right away by some of our clients who came to visit. 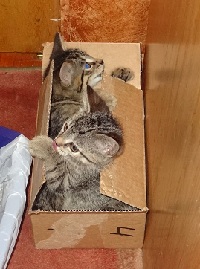 Apparently after going to the store Kanin decided he wanted to come home!  So he scared a volunteer (thank you awesome volunteer for worrying about him and looking after him) by vomiting a couple of times and hiding in a corner.  This was only two days after he had arrived. She rushed him to a veterinary clinic that was close who told her they were closing and didn't have overnight monitoring.  All they could do was give him an injection and she could take him back to the store. Now even more scared she rushed him to a 24hr clinic. 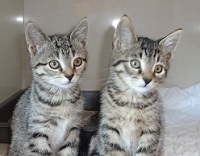 In the meantime, I missed a phone call (We have since learned that the landline we count on to hear has been kitten chewed) and by the time Shelley from Forever Homes found me on Facebook, it was thought that Kanin was very sick and might not make it. It was really hard giving this guy up the first time so to hear this put us into a panic. In the middle of diner we dropped everything and rushed to the 24hr clinic.........to find Kanin happily sitting in a carrier looking around.

While all this was happening with Kanin happy boy Kaelin was adopted into a new home with another kitten he’d been buddies with at the store.  He's doing great!

The helpful technician and I took Kanin's temperature, and we both did a quick triage assessment and decided we weren't concerned he was in big trouble but since we were there we were going to wait and have the vet check him just to be sure. I spent two hours with a purring happy kitten in my arms waiting for the veterinarian.  He was so happy he completely ignored all the strange dogs that were waiting for appointments around us.  The doctor did a full exam and found – you guessed it, nothing. We took him home to monitor him with instructions to bring him back if there were any more problems. There was none and he spent the night happily rubbing and saying hello to all his old friends before claiming a spot on my pillow to sleep. 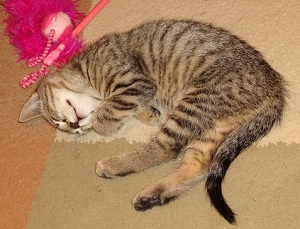 The next day I had Dr.Matt check him out again and kept him in the clinic for the day for observation...and he was completely normal!

So the bottom line is...sneaky Kanin wanted to come home! My boyfriend thinks this was the universes way of correcting the fact that we made him leave in the first place and he was meant to be here.  Maybe we can put him to work finishing up “The Adventures of Captain Krinkles” since all those pictures were destroyed due to a computer virus….