Infections of the nose and ears happen in domestic cats with some frequency. However, sometimes an infection is more than it seems. Cats (especially young cats) who experience frequent, recurrent, or difficult to treat infections of the nose or ears may actually have an underlying disease known as a polyp. 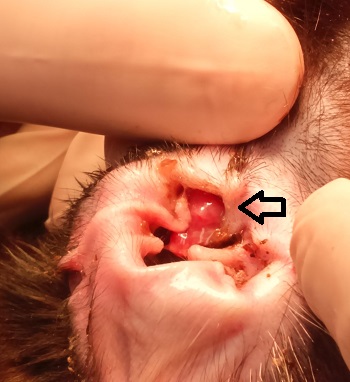 A polyp is a benign growth of tissue on a long, think stalk. The type of polyp that occurs in the ears and nose of a cat is an inflammatory polyp- this means it is composed mainly of fibrous tissue and inflammatory cells. While we do not know the underlying cause of polyps in cats, there are several theories. They may be the remnants of a fetal structure that does not fully regress, or they may be induced by chronic inflammation, such as viral or bacterial infections. Regardless of the cause, inflammatory polyps grow and occupy space. They may traumatize surrounding tissue and promote deep, difficult to treat infections. Most polyps start close to the ear drum, and either extend out the ear canal or through the Eustachian tube and out the nose.

Depending on the location of the polyp, they may be referred to by several names:

Polyps are sometimes very easy to find and diagnose, and sometimes very difficult. If they become large enough, the ay be visible within the ear (rarely in the nose). Your vet may suspect a polyp is present based on clinical signs such as chronic discharge from a single nostril or ear that does not resolve with antibiotics. Other signs of polyps may include dizziness and a head tilt (for otic polyps) or sneezing (for nasal polyps).

If your vet suspects a polyp, they may recommend an exam under sedation or anesthesia. This will allow a deep ear canal exam, and for the mouth, nasal cavity, and area above the soft palate to be examined. An endoscope, dental mirror, or metal retractor may be used to examine parts of the nose and mouth. X-rays are sometimes used to determine if soft tissue is present in the skull, but they cannot reliably distinguish polyps, infection and cancer. If a polyp cannot be seen but is suspect, a CT scan may be used.

If a polyp is found, it is removed by traction. This means it is grasped with surgical instruments and gently pulled off its base. This is often successful in improving clinical signs very quickly, however recurrence rates are common (15-50%). Aural polyps recur more often than nasal. Treatment with antibiotics or steroid is often used after removal to reduce the risk of regrowth. In situations where traction is not an option, or where regrowth must be avoided, other surgical options are available. Ventral bulla osteotomy is a procedure where the bone of the skull is cut into to remove the polyp. This reduces the recurrence rate to <2%, but is more invasive, more expensive, and often requires a surgical specialist. 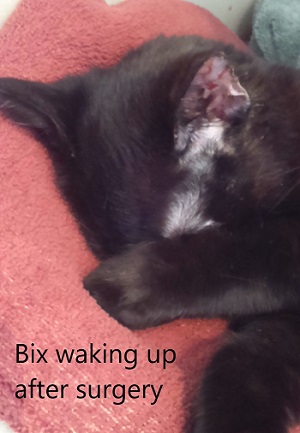 The prognosis for inflammatory polyps is good, with most cases resolving with therapy. It is very rare for an inflammatory polyp to result in death. Recurrence rates may be high, however, and traction may need to be repeated or a bulla osteotomy performed for long term control.

If you suspect your cat has a polyp or any other medical issue, or if you have any questions about you cat, please contact the veterinarians and team at The Cat Clinic any time.

Thank you to Bix and his family for allowing us to use his pictures.   Bix is a little cutie that one of our clients fell in love with and adopted.  He initially had ear mites but even after treatment his ears still kept bothering him.  We were finally able to see and remove his polyp.  We are now hoping he will be one of the kitties that it doesn’t regrow.

Bix just had his 2nd birthday and his ears haven't bothered him since the polyp was removed!

Hi Bri Unfortunately we legally are unable to make comments on a case that we have not seen.  In general if they are having problem finding a polyp a CT scan is one of the diagnostic tools used to find polyps.

Hi, our 7 month old kitten has a polyp in her right ear, behind the ear drum. Today she had a ventral bulla osteotomy to remove the polyp, however when the surgeon opened up the bulla, she couldn't find the mass. She noted that the bone was very thick and there wasn't much of a cavity. It is visible behind the ear drum, but not inside the bulla. She recommended a CT scan moving forward. Any thoughts on where this polyp might be hiding if not inside the bulla? Thank you.

Hello Patricia I'm sorry to hear your kitty is having some problems and understand that long term medications can be challenging.  Your best bet is to contact your veterinarian and explain the problems you are having.  There are many options when it comes to steriods in cats.  The most common come as a pill but they can also be formulated as liquids, flavoured chews and dermal creams.  It may also be that they need to work with you for a less "hands on" approach when giving the medications so kitty isn't avoiding you.  This might be as simple as crushing the tablet in a tablespoon of canned food or he gets some loving while you rub a cream in his ear.  Give them a call they should be able to come up with a plan that works for you both.

Hi, My cat has had a polyp removed about a month ago. At the time they gave me steroid pills to give him after surgery Which I was able to give him for a period of time.....I noticed that he didn't eat very well and slept alot. He clearly was having a reaction to the meds. I also found that he was now afraid to come to me, he would run and hide. Weeks prior to surgery I was always cleaning his ear applying drops, now having to give him his pill. He simply won't come to me anymore. I stopped giving the steroid pill. It was a hit and miss. One day I could grab him and shove a pill in his mouth than we would start all over again, he saw me coming and would run and hide. It took hours to give him his pill. I simply gave up. With that said tho, now I'm worried that the polyp with come back. He simply doesn't trust me anymore. I'm heartbroken. What to do?! Sigh!