Fighting leads to Trooper Having to Spend a Month in Hospital 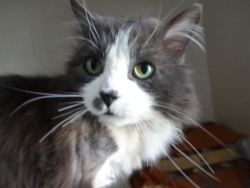 Trooper came into our practice in March when his caregiver noticed a great big infected wound on the side of his face.  Trooper is a stray who at the time being unneutered got into a lot of fights to guard his territory.  He is fortunate enough to have a caregiver who makes sure he always has food and shelter but because Trooper and an existing indoor cat don’t get along Trooper must stay outdoors.

One of the big risks with outdoor cats is infected bite wounds caused mostly by other cats.  To make things more complicated Trooper also turned out to have Feline Immunodeficiency Virus or FIV.  FIV is transferred primarily by bite wounds and makes the infected cat’s immune system not respond as well when challenged.   This means any time they get an infection it is more severe and takes longer to heal than normal.

What all this boiled down to was a bite wound that most cats would have needed antibiotics for a couple of weeks, for Trooper turned into a 4 week long hospital stay. 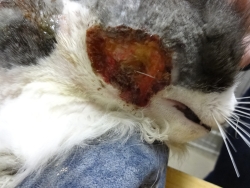 We started his treatments by putting Trooper under a general anaesthetic so he wouldn’t experience pain while we cleaned up and debrided the wound.  When we were done trimming off all the dead tissue there wasn’t enough skin left in order to close the wound so it needed time to close on its own.   While he was under we also neutered him and combed out some matts.  This is also when we ran the felv/fiv test and found out poor Trooper also had FIV.

Because he’s an outdoor kitty who doesn’t always show up regularly enough to get his medication consistently we decided he should stay with us for 2 weeks so we could keep him on some pain medication, antibiotics and for us to keep his wound clean. 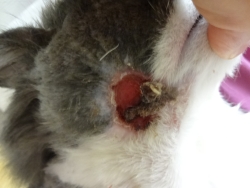 At the end of the first two weeks the infection was all cleared up but the wound itself was still very open and raw.  Combined with a cold snap that had moved in we were very worried that sending him outdoors again at this point would possibly set his progress back significantly.  After discussing his situation at length we felt strongly enough that he should stay that we donated another two weeks of boarding to make sure Trooper had a chance to completely heal.

One month in total later he still has a small sore and will always have a scar but he’s happy and got to go “home”. 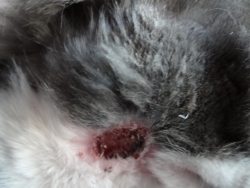 Hamilton has a large stray cat population and unfortunately a lot of them have FIV.  Chances are that because of the already existing territorial issues in Troopers neighborhood the other cats in the area are most likely already infected.   With him being neutered now we are hoping he will fight less as well.

With his FIV status Trooper ideally should become an indoor cat who is either by himself or with other FIV positive cats. 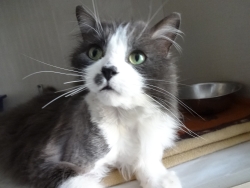 Trooper is currently doing well but is looking for a new home where he can be indoors.