Bennie came to us last week as a very painful unhappy kitty. Upon physica 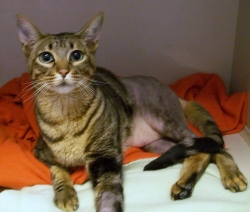 l exam the pain was found to be mostly generalized to the right hip area. It was decided that because of the level of discomfort he was in he should be given pain medication, sedated and have radiographs (x-rays) done. The radiographs showed that Bennie had an uncommon condition called "idiopathic necrosis of the femoral neck" with a resulting break of the right femoral head. What this means is that for some reason Bennie's body breaks down the bone matrix just beside the hip joint making that area very weak. It was also noted that the same area on the left side was less dense on radiograph than the other normal bone. When doctors look at radiographs we position them as if the cat is standing on his hind legs facing us, so his right will be on our left. These kitties are normally young male cats who appear perfectly normal 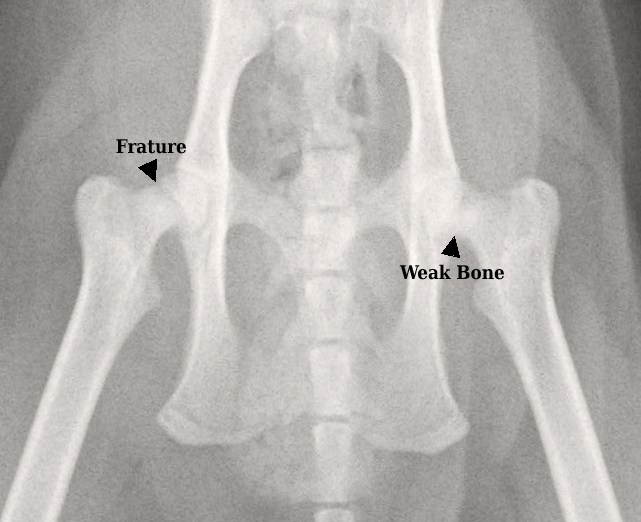 and then one day when doing a normal activity like walking up the stairs or jumping down from the couch they become very painful and lame because the end of the femur bone breaks off. To make matters worse, the unbroken leg that is trying to compensate will normally break soon after due to the extra pressure on it and it's own bone weakness.

Bennie needed a very specialized surgery so we called in Dr.Kim Murphy a Board Certified Surgeon to preform a bilateral femoral head and neck excision arthroplasty. Unlike most other hip surgeries, the head of the femur is removed but not replaced. It is allowed to heal and develop its own tough fibrous scar tissue so that the 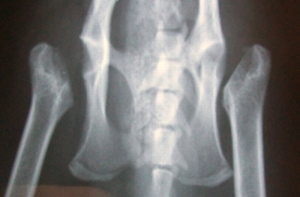 joint is no longer bone−to-bone. Although this surgery is typically classified as a salvage procedure it is the best option for cats with this type of disease related injury. Unfortunately cats bones are to small to properly support a typical hip replacement like those available for humans or large dogs.

After his surgery Bennie was a model patient. You could immediately see improvement in his movement and the reduced level of medication we needed to control his pain. He has several weeks of physiotherapy and after care to still get through but Bennie will soon be able to run and play again. Because of slight limb shortening and some loss of range of motion, some abnormalities in his gait will always persist. However he will now be able to continue leading a happy active life.

Thank you to Bennie's family for generously letting us share his story.

Approx 13 weeks post surgery and Benny is doing great, he is running just as fast as our other cat and no longer has any pain. He wants to jump up but knows that he can not as yet, a couple of small home made stairways get him to the places he loves the best. His gait is a bit a bit different than it use to be but it just gives him a nice wiggle. He is still a very happy cat that still has a good quality of life. Thanks again.

Bennie continues to improve on a daily bases, he is able to do the flight of stairs in the house, a little slower coming up. I am amazed at the progress he has made in the 2 weeks post surgery. Thank you to all the staff at The Cat Clinic and DR. Kim Murphy

Being a friend of Bennie and his family...many thanks to Dr. Murphy and all the staff of The Cat Clinic for taking such great care of him! He's doing great and it's terrific to see! Bennie rocks!!!

Hi I am Bennie's owner and I would like to let you know how things are going. It was a very emotional time for us when we found out that our little 1 1/2 year old Bengal had this condition. The only indication we had of any kind of problem leading up to this was a slight limp which we attributed to a pulled muscle. He seemed to be getting better and then one day I heard him cry out and found him laying on the living room floor. When he attempted to walk we knew right away that there was something seriously wrong as he was reluctant to put any weight on his one back leg. Now we are on the other side of the surgery and he is doing incredible. His incisions are almost healed up and his fur is starting to grow back. The first couple days with him at home were a little scary as we didn't know what to expect. We kept him secluded in a very large dog crate for the first week to minimize his movement. After that, he has had access to our main floor and is managing just fine. We have had to do physo exercises on him 3 times per day and in the second week he has been doing 1 flight of stairs per day. He was back to The Cat Clinic yesterday for a check-up and the vet was very pleased with his progress. He is getting around just fine and in true Bengal fashion, is anxious to start climbing to the highest spots in the house!! On a final note, thank you so much to The Cat Clinic and all their staff for the incredible care Bennie received while he was there. Also, thank you for allowing me to visit with Bennie each day!!