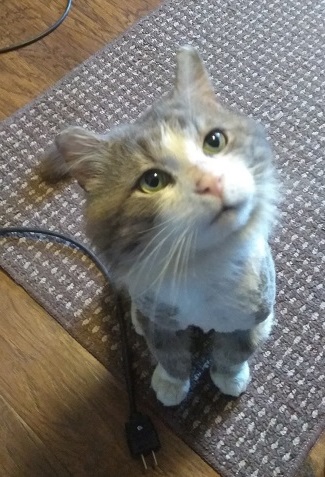 Update:  Scruffy has been with us now for a couple of months and he has come such a long way.  He’s now an outgoing happy go lucky man who likes nothing better than to chat away with anyone who will pay attention to him.  He’s been very comfortably spending his days in our display kennel in the front reception room.  Although we still feel Scruffy would do best in a home without small children we aren’t as concerned about finding him a “quiet” home as we once were.  If your able to give this guy a chance he sure would appreciate it.

Scruffy came to us from Quebec.  This gentle sweetheart has obviously had a very rough short life.  He’s a super shy three year old kitty whose going to do best in a quieter home with someone who is willing to give him the time to come out of his shell.  He has tested positive for FIV but that is no reason he can’t have a long happy life.

When Angie first saw his rescue video online, we knew his shyness put him a little outside of our regular wheel house.  He had a euthanasia deadline that coincided with Dr.Liz and Angie’s birthday and that just didn’t sit right.  After a lengthy conversation it was decided we would take the chance on what was supposed to be a little female kitty named Goutte.  He arrived so scared that all he wanted to do was hide and he was covered in burrs, wounds and what felt like tar.  We quickly discovered Goutte was really a boy and made plans to get him neutered.  While he was under anesthetic, we gave him a lion cut as his coat was such a mess there was no saving it.   His now short hair revealed even more old scaring and fresh wounds.   We decided to rename him Scruffy. 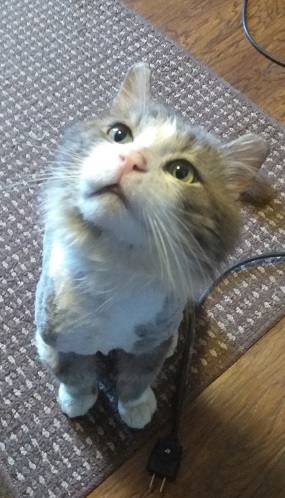 Scruffy was coming out of his shell and beginning to trust the team members working with him when we discovered how much he LOVES treats.  This made working with him super easy.   He’s so cute and gentle when he takes his treats that he’s very much become a staff favorite.

We do feel Scruffy is going to need a quieter home with someone who realizes that when anything new happens he reverts to hiding and will need a bit of patience.   However, once he’s comfortable he loves attention.  We also feel it’s going to be better for him to meet potential adopters by “appointment” as the display kennel in the front office will be too overwhelming for him.

If you’re interested in adopting Scruffy or have any questions about FIV please feel free to contact the clinic. 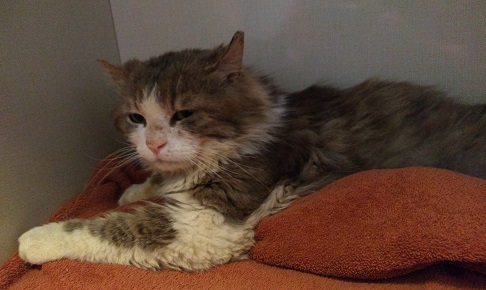 So glad to hear that Scruffy is adopted.