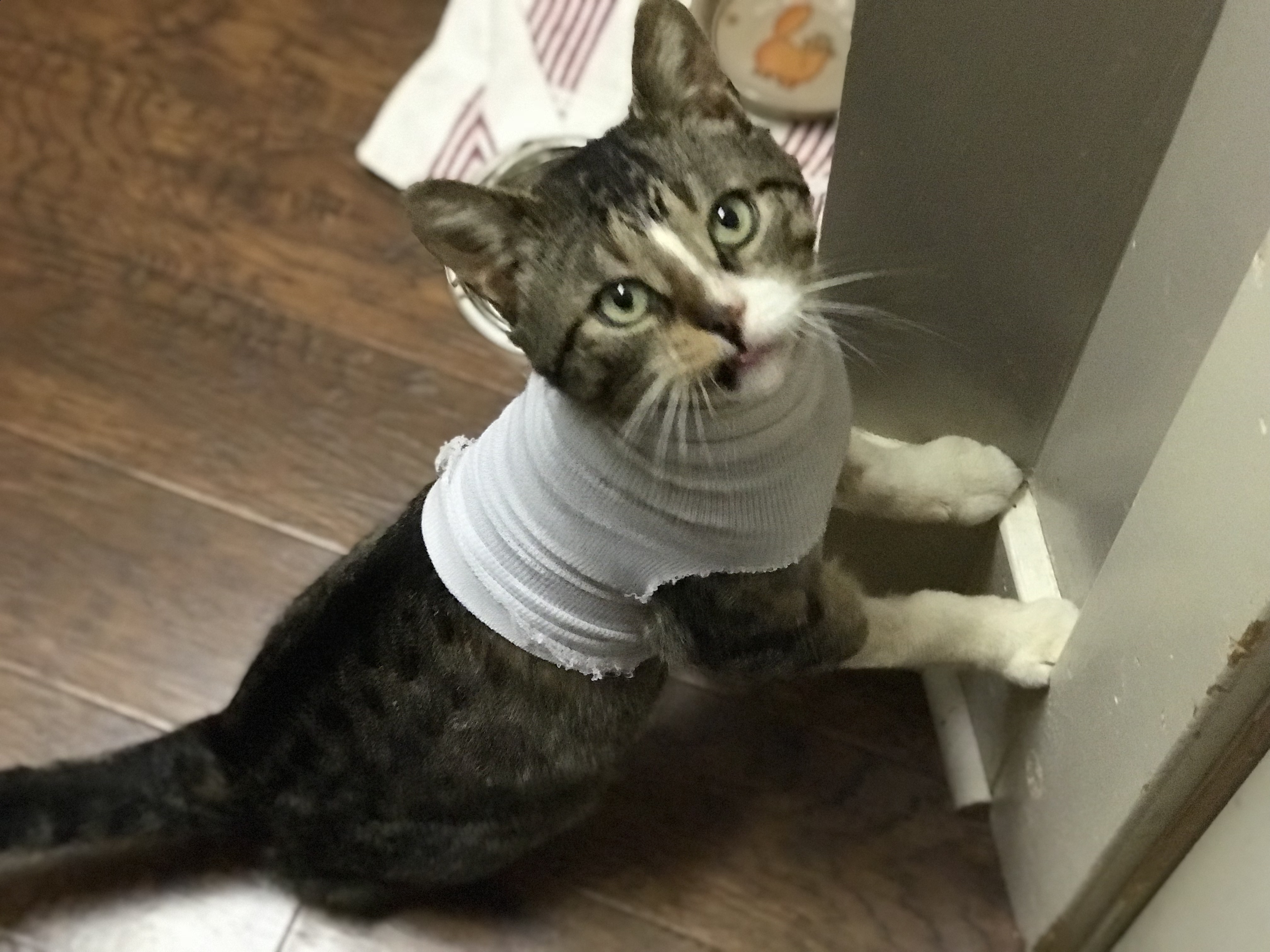 wonderful team at Hamilton Street Cats were trying to catch some colony kitties to take them in for the Trap Neuter Release Program when they noticed one of them had a big swelling under his neck and down his leg and he didn’t look so well.  Initially they asked if we could help with the idea that once he was well he would either be placed with a rescue group or released back into the colony depending on what he was like when he was feeling well.  Immediately the HSC started an online campaign to raise funds for his treatments. 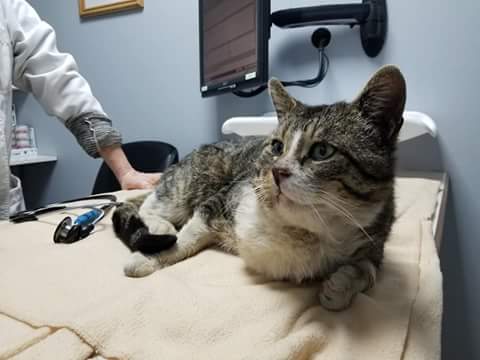 Lucky took us on a little bit of a roller coaster ride. This guy was a bit of a mess when we first met him, he had healing scratches and scars all over him, he had a tick and one of the biggest abscess’s Dr.Noreen had ever seen. We anesthetized him, lanced and flushed the abscess, neutered him and then started him on supportive care including antibiotics and pain medications. After a few days he still had a fever and wasn’t bouncing back as fast as we felt he should have. In spite of feeling sick he was a quiet and a well behaved gentleman.  We were worried about his lack 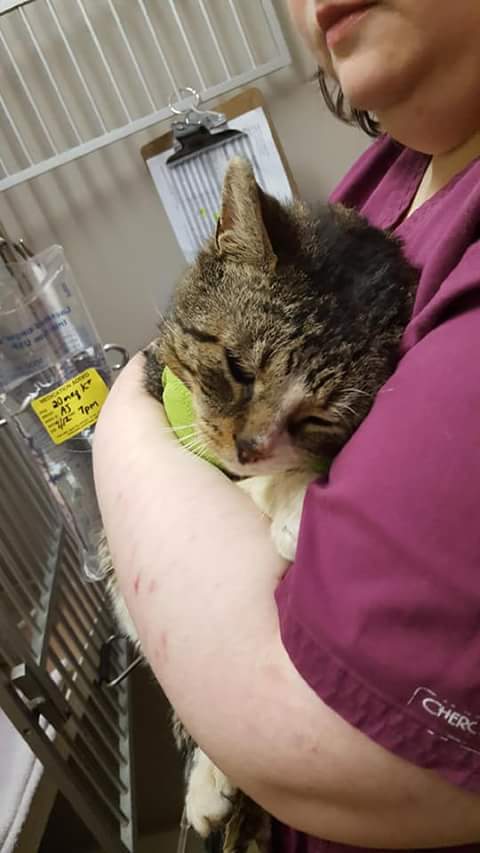 of progress. After discussing the case with the HSC team we reanesthetized him to do more surgery on the dying tissue around the abscess. This can unfortunately happen when the abscesses are as large as Lucky’s. We also decided to do some further diagnostics. 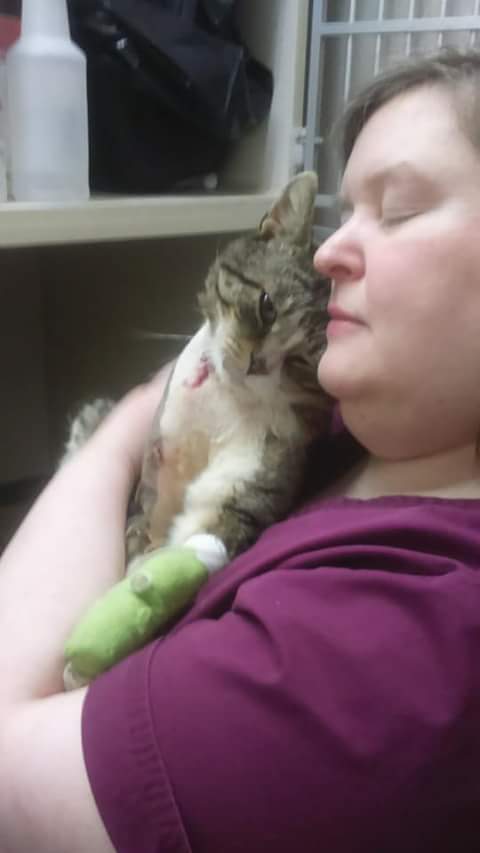 We switched his antibiotics and finally Lucky started feeling better!

Once the fever “broke” his real personality finally had a chance to shine through.  By this point several of our team had totally fallen in LOVE with him.  It was pretty impossible not to.   We spoke to the HSC team and they were thrilled with the idea of letting him join our adoption program.

With the right introduction this happy outgoing purrbucket would do well in any home. 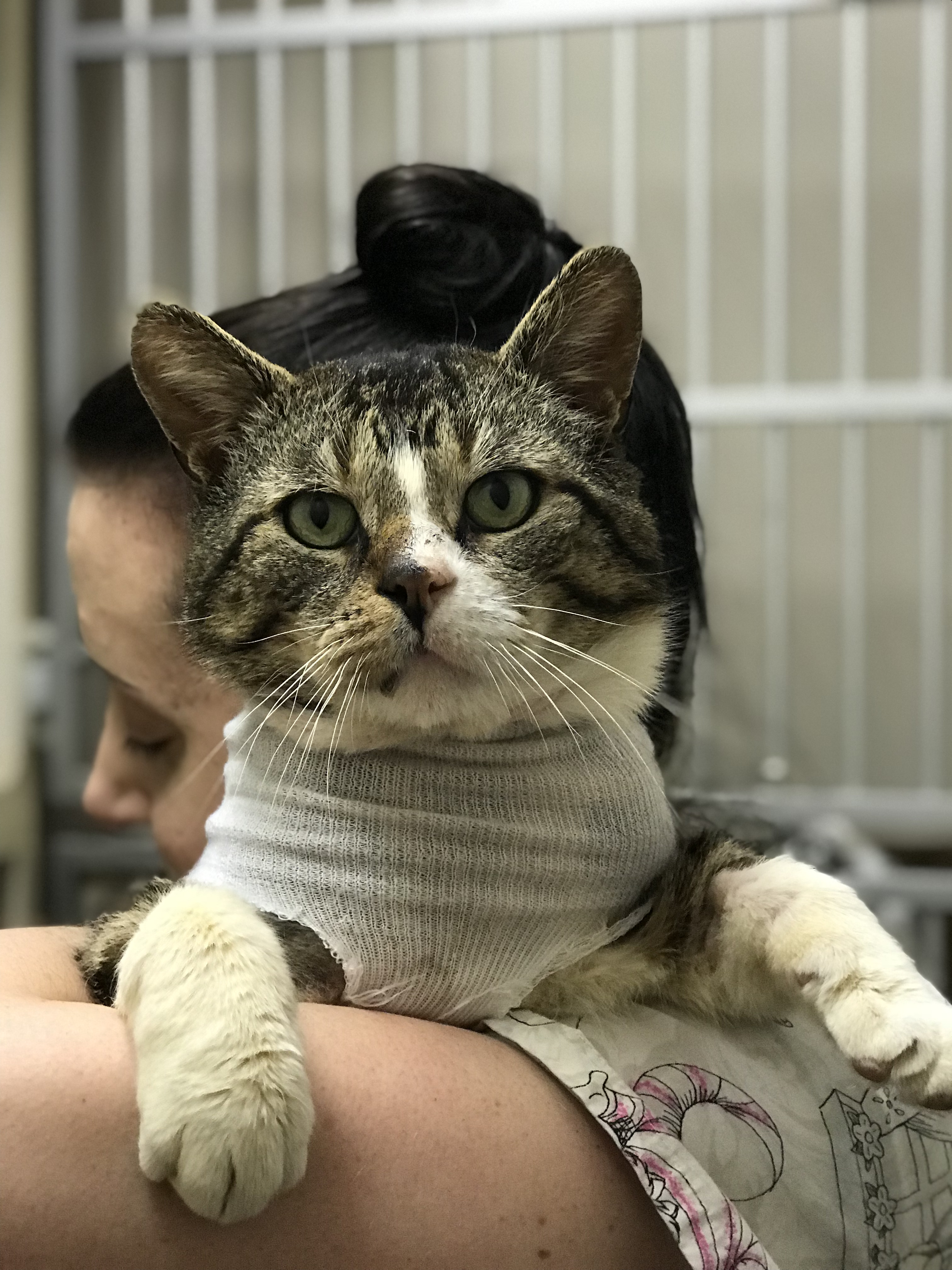 “While FIV is a contagious disease, the risk of spread in stable households (where all cats get along and do not generally bite each other deeply enough to draw blood) is extremely low. Several studies have shown that infected cats can live with healthy cats for many years without disease transfer.”

You can find more information on FIV at the Winn foundation.

Or feel free to ask one of our Team Members.

Our Adoption fee is $175.  This includes the full initial series of vaccinations, neutering or spaying, deworming, defleaing, fecal testing, FeLV/FIV testing, treatment for any external parasites, and microchipping.  In Lucky's case it also includes treatment for his abcess and parasite infections.

Regarding the last photo of male cat Lucky, here is what he is thinking: "What are you looking at?" or " I feel a little weird but kind of better too" or "after all this episode here, when do I get the good food?" Written by Nigel Bull