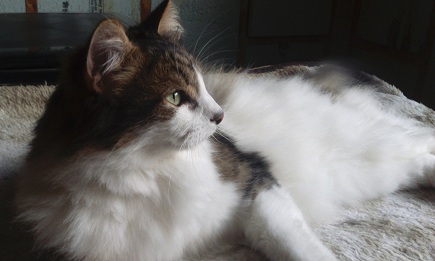 We had a sad situation happen one morning at the beginning of October. One of our technicians received news that an extended family member thought their cat had broken its leg after being in a cat fight and falling down a set of stairs the night before. Unfortunately they didn't have the money to look after a potentially costly veterinary bill or any way to travel because they didn't drive. Was there some place they could surrender him to so he could get the help he needed? Within the conversation it came up that the owner had given him some medication to try and make him feel better as he seemed to be painful......they found a dose on line to give the cat children's Tylenol. Now we hope this was a reading error and the website really said children's aspirin but either way they thought they were ok to give him the 1/4 of a ml to make him feel better. Tylenol at any dose is not good to give cats and potentially lethal. Arrangements were made to surrender him to our technician and for transportation (1 hour away) to get him to the clinic as fast as possible. When he arrived the syringe used to give him the medication was a 35ml syringe and he had been given 1/4 of an ounce ... this is about 7 mls. 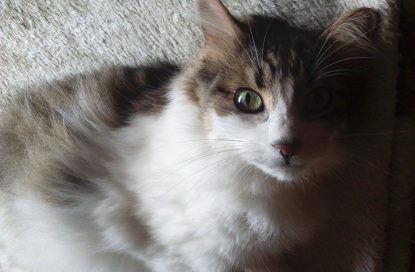 Definitely a toxic dose.  He was placed on IV, started on emergency medication.and had multiple blood work profiles performed over the next week.  Thankfully Lobo's blood values never changed (we think he spit a lot of it out) and he made a full recovery from the Tylenol.

He is currently fostering at one of our technicians homes while he recovers from a sore leg (not broken) caused by original fight/tumble down the stairs but he should be available for adoption soon. 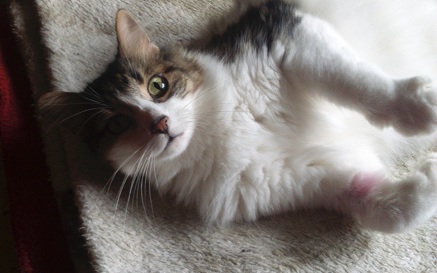 Lobo is an 8 year old FeLV/FIV negative neutered male. After years of being picked on by another cat Lobo would ideally love to be in a home with no other cats.  He is initially a little nervous in new situations but he warms up  quickly and then becomes a real snugly purr bucket.